Azov Battalion is one of the main battalions of the Kiev junta. Its official insignia is openly and declaratively Nazi (Wolfsangel). Its fighters leave no doubt about how they understand what they are fighting for: for Nazism and NATO, side by side, as the symbols which they display here testify. They are confident that the NATO and Nazi flags deserve to stand side by side and with them and under them they are going to the battle. 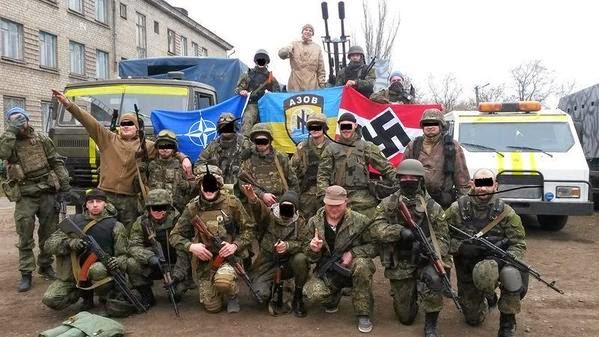 Nazism and NATO thus also sums up what Azov Battalion and the Maidan stand for and what they are fighting for. The elite fighters of the Maidan have no doubt about this, for it is their creed, their faith, their understanding--regardless of what political correctness of PR technicians want the rest of the world to believe.
Posted by Vladimír Suchan at 7:37 AM