Does the Militant Logic of US-designed Maidan in Ukraine Demand Maidans in Prague or even in Washington?

This time it offered a summary of a special US report on hybrid warfare, which is how the US and the Kiev junta (which copies and pastes) call Russia's perceived response to their violent Banderite regime change through the Maidan in Ukraine. According to the report, the trouble is that whatever Russia was doing or not doing is already way too much effective.

So how did we get there? According to the report published Sept. 26 by the Fort Bragg, North Carolina command, it appears that it is Fukuyama's fault. For he argued that, with the fall of the Soviet Union, ideological battles and hence also fundamental political battles ended and all what was left was just shopping and the hunting expeditions of the otherwise bored elites who, instead of golf, wanted to be recognized as superior to others. The report of the Fort Bragg command, no longer giving Fukuyama any credit, says in this way:

"The future geopolitical environment will feature ideological battles among states, the report said, noting that “Russia, China, and Iran currently conduct political warfare activities to further their individual goals. The United States, by contrast, ceased using political warfare at the end of the Cold War and instead is focused on “public diplomacy” that seeks to “tell America’s story” rather than influencing events in support of US and allied interests."


According to the certainly not very cheap report, what happened was that, all the trillions spent on war and the military budget notwithstanding, the US "ceased using political warfare at the end of the Cold War" and focused instead only on trying to "tell America's story." Neoliberalism, the Washington Consensus, austerity programs, the bombing of Yugoslavia, the destruction of Iraq's society and economy, the Iraq War, Drang nach Osten must have been just story-telling efforts. We were just told stories, while Russia, China, and Iran were doing all the ideological, political, and hybrid fighting.

The most obvious proof of this comes in a picture attached to the article which shows some Chinese officers at an unknown time and at a unknown place doing something at their laptops. Business Insider, however, helps the reader to know all of what is there to know. The caption provided by Business Insider reads "Chinese hackers." 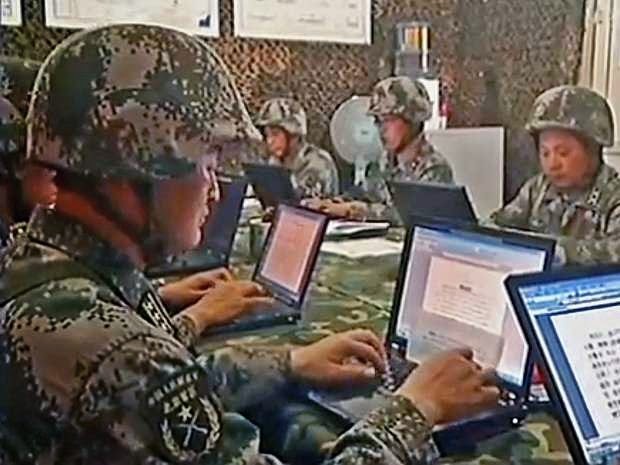 I am puzzled to see that Chinese hackers would be hacking into US systems under such powerful man's protection as steel helmets. However, for now, I am willing to go with the program.

Other examples of the unrestricted nature of China's warfare against the US "include China’s threat several years ago to sell off large US debt holdings to protest US arms sales to Taiwan, and cutting off sales of rare earth minerals to Japan in a dispute over the Senkaku Islands in the East China Sea."

In other words, if China decides to sell what it bought from the US--i.e. the bonds--this too counts at Fort Bragg and, plausibly, at the White House as a military action against the US. Cutting off sales of minerals to Japan is another example of China's unrestricted aggression.

One has to wonder how the former unpolitical and non-ideological "telling of the American story" needs to be changed to counter such threats. The report is mercifully helpful in this regard. It says:


You see, one just needs to repeat the word "warfare" as many times possible. Here 15 times in one brief passage, and 14 times in one sentence. If your mind is warfare's mind, then whatever you see in the world cries back to you "warfare." Whatever China does (or does not do) is from now on defined as warfare. One's stylistic skills just need to be commensurately unrestricted and unconventional.

In other regards, the report is also telling us that to be a Russophile now means in the book of the Pentagon and NATO to be "a dissenter": "“The brazen audacity of unconventional warfare within Russian hybrid warfare has produced urgent concern among America’s NATO and non-NATO partners that Russia may apply similar approaches to other regional countries in the region with dissenting Russophile populations, such as the Baltic States, Moldova, and Georgia."

Importantly, the report--published just some two weeks after the Minsk Agreements of September 5--is effectively declaring the beginning of new "political warfare," which appears to mean for the strategists use of all peacetime weapons ("peacetime efforts")... actually "ALL MEANS" for war.

Business Insider then cites Sebastian Gorka, the Horner professor of military theory at the Marine Corps University and an adviser to Army Special Operations Command, who seems to have something to do with the report. According to Gorka, "China, Iran, Russia, and the jihadis are all at war with us right now.”

It is not that often to have a professor declare war on three states at once, representing some 1.5 billion people and to throw into the basket also ISIS, al Qaeda and other proxies which the US was nurturing as part of its new hybrid wars.

Bill Cowan, a former Army Special operations officer, is used to draw a conclusion. He argues that, as of now, the US government or the Obama leadership is a problem for him: "We don’t have the leadership to make this concept/doctrine the core doctrine of our fight against our enemies.”

Does the implementation of this new declared unrestricted (and not just hybrid) warfare requires an American Maidan too--according to these special forces strategists from Fort Bragg?