MH17: Who is hiding behind the Buk?

Czechs have an idiom "číhat (čekat) za bukem," which means "to lie in an ambush"--literally, to "hide behind a beech," which, in Czech and other Slavic languages, is "buk."

The key to the tragedy of flight MH17, Boeing 777, is to look behind the Buk, whether taken literally as the name of the missile, which could have brought the plane down, or in a sense of the very thick wall which has been built around what could have been a well planned ambush the main target of which might not have been the plane itself, but peace and fates of several nations. If the downing was not an error, then it was an act of war calculated to affect the course of the war in Ukraine.

1. By now, it is evident that there are a number of local witnesses who claim to have heard and seen military jets in the air when MH17 crashed down.
2. A number of witnesses also reported at least two-three explosions. Assuming that one of them could have been secondary, this also increases a probability that more than one missiles were fired.
3. Ukraine has clearly several batteries of Buk missiles. Could the Kiev authorities provide information on their locations and logs?
4. In this regard, the most interesting would be any possible Buk battery south of Snezhnoye (the area of the crash site) for, the front-line is running just south of Snezhnoye.
5. Interestingly enough, the Ukrainian troops tried to capture Snezhnoye (this reminds me of the rush of al Nusra to capture a site of the previous chemical attack in Khan al-Assal near Aleppo).
6. The downing of MH17 offers two basic possibility: either it was an error or it was deliberate. If the attack was deliberate, the key factor would that of the motive. In other words, who could benefit from shooting down the plane? Clearly no one--unless part of the motive was to blame wrongly the other side. And this means that one does need to ask which of the parties would believe to be able to benefit from a false flag attack, and especially at this particular moment? In this regard, the current vicious global PR campaign leaves no doubt: the Kiev fascist regime and its Western sponsors.


From an RT article:


Aleksandr, another local who witnessed the plane falling from the sky, was watching TV but when he heard “a roar and two explosions.” He went out to see what was going on.  “[I] saw a spinning plane without a wing with something falling out of it. The plane was shot down,” he told RT. “There were explosions in the sky. And apart from the loud sounds of the plane itself, I heard the buzz which fighter jets make.”
Donetsk self-defense troops declared that they simply don’t have the military equipment to shoot down a plane from a 10,000-meter altitude, while Kiev said it could not have fired a missile at the passing civilian plane because it had no Buk missile launchers deployed in the region.
Meanwhile the Russian Defense Ministry said that the Ukrainian military has several batteries of Buk surface-to-air missile systems with at least 27 launchers, capable of bringing down high-flying jets, in the Donetsk Region where the Malaysian passenger plane crashed.
Moscow calls for intl probe into Malaysia MH17 flight crash – Russia’s UN envoy
Later it added that a Ukrainian Buk anti-aircraft missile battery was operational in the region and deployed at a site from which it could have fired a missile at the airliner.

7. First signs of the damage on the body of MH17 appear to confirm that the plane was hit by a fragmentation warhead, or continuous rod warhead (seehttp://en.wikipedia.org/wiki/Air-to-air_missile), which is ALSO characteristic of an air-to-air missile. 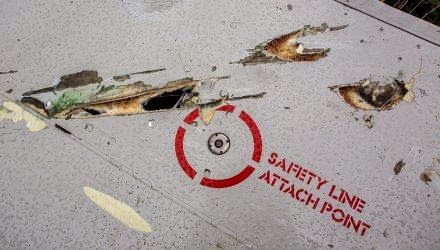 8. Moreover, the picture which is used for the above said analysis might be also very significant in its own right. For the holes created by the fragments might also allow to establish the direction of the blast. As far as I can tell, "safety line attach points" are for emergency landings (i.e., on water) and they are to be found on the upper side of the wings. Now, again, if I understand it correctly, then the writing is printed to be read from the front. Putting all this together, it would then appear that the blast came a) from the outside of the plane (hence this puts an end to the bomb-on-the-board hypothesis), b) the blast was actually initiated from the front of the plane not from behind, hence it would this means that, if a fighter jet was shooting, it was shooting not from behind, but from meeting MH17 head-on; and c) the holes appear to be made by fragments flying against the plane not only head-on, but also from above and not from below! If this is correct, then this would seem to indicate that the missile exploded in front and somewhat above the plane.

9) Here is an even better picture of the same critical portion of a wing of MH17. 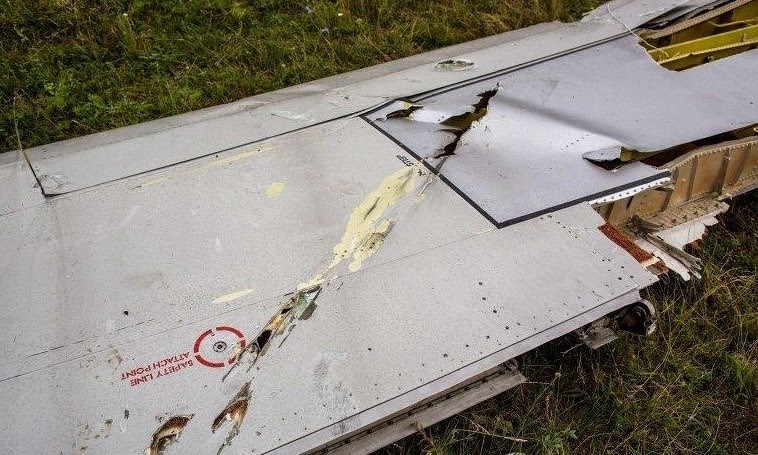 It shows a path of a fragment: from the front, slightly above, and, if this is the right wing (looking forward from the plane), then the missile was fired against the plane and from 2 o'clock, which, given the flight path, would be from south-west, that is from Amvrosivka-Artemevka. The explosion might still have originated from an surface-to-air missile, but the chances of an air-ti-air attack appear to have increased.

10. The identification of the direction of the blast, moreover, also disproves the junta's videos with "leaked conversations" from July 17 and from July 18. The first leaked tape was supposed to feature commander Bes from Gorlovka (40 miles north-west). The second "conversation" placed the presumed Buk battery in the rebels' hands in Donetsk "behind a library"!

But the missile could not have been launched either from Debaltzevo (the July 17 tape) or from Donetsk (the July 18 tape) for the simple reason that these places are in the wrong direction and also a bit too far.

The Kiev regime came up with a video of a Buk battery taken somewhere from behind a bush, which it claimed was made in Snezhnoye. This video, in turn, refutes both the tapes of "recorded conversations" of the rebels previously released by the Kiev regime.

Moreover, as we can see, the two tapes an the video from Snezhnoye are actually refuting each other! All of them present a very different story with a very different scenario (commanders, names) and a different location of the presumed Buk battery! In addition, there is no way for the rebels to move a Buk battery across to Russia, as claimed by the Kiev regime, for Snezhnoye is near a front-line and is separated by the Ukrainian troops from Russia to the south.

If the Ukrainian Army used a BUK missile, then it would most likely have to be fired north of Amvrosivka, which is a place of a large concentration of Ukrainian troops. It is also south--west of Torez and Snezhnoye in the proximity of which the crash site is located. BUK missiles have a range of up to 20 miles--but, practically, closer to half that range. But that's enough for a battery in the Amvrosivka region.

11. The key one undisputed fact that we have is that the Ukrainian authorities changed the flight path of MH17 on Juy 17 and move it more than 200 miles north--directly over Gorlovka and right into a war zone and the very space where Kiev was carrying out on that very day and also during that critical moment combat missions with their Air Force.

Posted by Vladimír Suchan at 7:53 PM