This could almost be a smoking gun of the false flag attack with respect to MH 17. Some five hours after the loss of MH 17, the Ukrainian Security Service published a recording of alleged pro-Russian military officers led by commander Bes, who is based in Gorlovka (Horlivka), allegedly confirming that they shot down the Malaysian Boeing 777.

The video was uploaded about 5 hours after the time of the plane's crash--20:16 PM local time.

Moreover, and even more importantly, as the log of the video shows (see the photo), it was actually made the day before on June 16 at 19:10 PM: 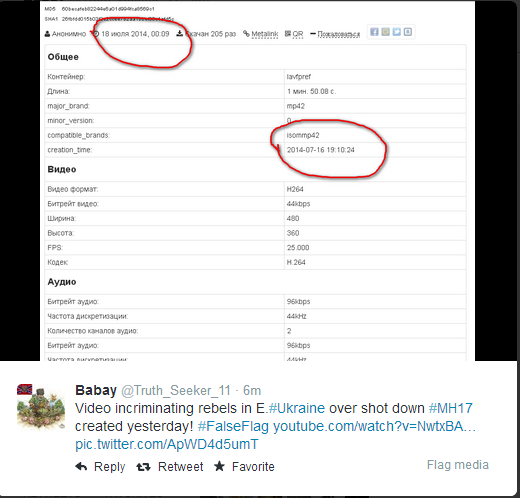 The first alleged recordings are at 16:40 and 16:33. Apparently local time. At the alleged 16:40 (still more than half an hour before the plane was supposed to crash), a person in the taped conversation claims that the plane was shot down "about half an hour ago." At 17:10 the next call is made that is telling about allegedly finding a first casualty.

Now, it is true that legendary commander Bes is based in Gorlovka. But Gorlovka is some 30 miles from the crash site in Grabovo. A Ukrainian officer was later quoted that the self-evidence has allegedly a battery of Buk missiles 15 miles way from the crash site, which still put it some 15 miles away from Gorlovka. http://www.huffingtonpost.com/2014/07/17/malaysia-airlines-plane-crash-missile_n_5597014.html According to the tape, the site which was supposed to fire the missile is identified as a "block-post of cossaks" in Chernokhyne near Debaltzevo, Lugansk, which is about half way between Horlivka and Grabovo but further to the east away from the line between these two places. But blockposts are  not exactly positions to be equipped with Buk missiles.

Now what is also interesting is that July 17 MH17  flight was the FIRST ever flight which Ukrainian air controllers diverted directly over the Donetsk People's Republic away from its usual routes which avoided both the Donetsk and Lugansk People's Republics either to the south or to the north. Not this time. On the previous routes of MH 17 see here (scroll down the page).

Furthermore, Ukrainian air controllers made sure that the flight goes directly--precisely over Gorlovka (http://www.zerohedge.com/news/2014-07-17/here-real-time-flight-path-malaysian-airlines-flight-mh-17), which happens to have the legendary self-defense commander Bes with whom the Ukrainian secret services have a whole history of especially acute animosity and accounts to settle. His name or codename is also one of the best known and most recognizable among the self-defense commanders right after Strelkov, Babay (who is now away), Mozgavoy and Khodakovsky. So, clearly, the Ukrainian junta also wanted to pin the blame not only on the resistance as a whole, but also on a specific person with an established name and fame.

And what are the chances that out of all the places Ukrainian air controllers would send the plane just over Gorlovka and right by a place where they claim to have a knowledge about Buk missiles being stationed there? (Can anyone find any Buk missiles near Debaltzeve?)

From the trajectory is then also clear (unless self-defense did have a functioning Buk missile system and, despite the expertise which is needed for operating such a complex system, they could not distinguish and recognize a big civilian plane) that MH 17 was almost certainly not shot by a Buk missile, but that it, indeed, had to be a Ukrainian fighter jet some 10-20 miles south-east of Gorlovka.

In fact, self-defense has its own tape of a conversation of an unidentified Ukrainian jet pilot in the area exactly at the time when MH 17 was shot down. It is here:


Thus, if this was, as it looks, a setup and a false flag, special operation, one may also ask what plan, if any, there was about with respect the place where the aircraft would be crashing down. It is possible that the idea was that a successful hit would make the jet disintegrate in the air. However, with a big plane like this one, that's not likely. In this respect, another good question to ask is how far is the crash site from the nearest Ukrainian position. That would also be good to know.

Another interesting and relevant piece to the puzzle of MH 17 downed south-east of Donetsk: on July 15, the Kiev regime suspended its flights over east Ukraine after losing a plane. But then, in the afternoon of July 16, Ukrainian troops resumed flights of military aircraft over Donetsk and Lugansk, and especially over Saur-Mogila, which is relatively close to MH 17 crash site, a spokesman for the Ukrainian national security service reported. The flights were suspended on Tuesday after the downing of a transport plane in Lugansk Region. The resumption was confirmed by militia sources, which said airstrikes were being delivered near Saur-Mogila Hill in Donetsk region. The next day, July 18, MH 17 was directed by Ukrainian air controllers over the very zone where Ukrainian military aircraft were operating.


Sources closed to the Novorossyia armed forces believe that MH 17 was indeed shot down by a SU jet fighter whose pilot was most likely a Polish mercenary. The fighter jet was reportedly at an altitude of 7-10 km. Earlier reports from multiple sources were saying that MH 17 was "accompanied by a pair of fighter jets." The range of Buk missiles is otherwise about 2-15 miles.

In other news, Strelkov dismissed "humanitarian corridors or ceasefires" for any investigators of the crash of MH 17--the crash site is on the territory of the DNR and no extra security arrangements to get there are needed.